Architect Dennis McFadden has resigned from a University of California committee protesting the design of a college dormitory on its Santa Barbara campus, where more than 90% of its 4,500 students are believed to be living in windowless rooms .

McFadden resigned his 15-year consulting architect role on the university’s design review committee on the project, saying he was “bothered” by the building’s design, The Washington Post reported.

Munger Hall was designed by billionaire investor Charles Munger, who donated $ 200 million to the project, which has an overall budget of around $ 1.5 billion.

The majority of students live in rooms without windows

While the gigantic Munger Hall would have fourteen entrances and exits, 94% of the students who live there are said to be in rooms without windows. Rather, single occupancy rooms would have virtual windows that simulate sunlight.

Each of the dormitory‘s nine residential floors would have eight “houses,” with eight separate “suites” organized around a shared kitchen and living room. The top floor would include a one-acre yard with “social pods” and seating areas.

In his resignation letter, McFadden called the design “unbearable from my perspective as an architect, parent and human being.”

“A large body of documented evidence shows that indoor environments with access to natural light, air and nature views improve both the physical and mental well-being of occupants,” he said. writing.

“Munger Hall’s design ignores this evidence and seems to take the position that it doesn’t matter.”

No other project “potentially more destructive to the campus”

McFadden said he left the committee because there was no opportunity to make any changes to the dorm’s design, according to the Santa Barbara Independent.

“The design has been described as 100% complete, approval has not been sought, no votes have been taken and no further submissions are planned or required,” he said.

“Yet in the nearly 15 years I have served as a consulting architect in the DRC, no project has come before the committee that is larger, more transformational, and potentially more destructive to the campus as a place than Munger Hall. “

McFadden also pointed out that the current largest single dormitory in the world, Bancroft Hall at the United States Naval Academy, houses only 4,000 students and is spread over multiple wings with more than 25 entrances.

If this report is true, this design is a grotesque and sick joke – a prison disguised as a dormitory. No, the design does not belong to billionaire donors. How far UCSB has fallen since the days when it had architects like Charles Moore. https://t.co/ERFIzAz5jZ

American architecture critic Paul Goldberger, winner of the Pulitzer Prize, also uploaded the Munger Hall project, Tweeter: “If this report is true, this design is a grotesque and sick joke – a prison masquerading as a dormitory.”

“No, the design does not belong to billionaire donors,” he added. “How far UCSB has fallen since the days when it had architects like Charles Moore.”

Virtual windows to have a circadian rhythm control system

Munger, who designed the building, is the vice chairman of Warren Buffett’s Berkshire Hathaway conglomerate and has no formal training in architecture.

The detailed design of the UC Santa Barbara building is carried out by VTBS Architects, who is the reference architect of the project.

“While single occupancy rooms offer each student their private space, every effort has been made to encourage cohabitation and collaboration in student life. “

The lack of natural light inside the majority of student rooms was one of McFadden’s criticisms of the project, but Banvard believes this is unfounded.

“All single occupancy rooms have either a conventional window or a ‘virtual’ window,” he said.

“All virtual windows will have a fully programmed circadian rhythm control system to substantially reflect the light levels and color temperature of natural daylight.” 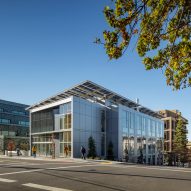 “Circadian rhythm lighting is already present in many types of buildings,” Banvard added. “All common areas and amenities, including the large rooms and kitchens in each home, have significant access to natural light.”

Munger has previously contributed buildings to other campuses, including Stanford and the University of Michigan.

The main image of Munger Hall is courtesy of the University of California, Santa Barbara.